German people discovered their wanderlust,  their love for travel and the Volkswagen Beetle ascended to their preferred companion.
For each and every destination or excursion - be it the coast, the mountains, Fairy Parks or Zoos - Koziol produced and provided the matching brooches or pins, souvenir pictures on vases or wall plates. Worldwide! 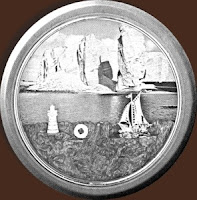 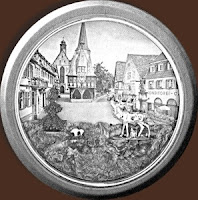 Koziol had become the world's biggest  souvenir factory. The down side was that Father constantly had to come up with new "inventions", new ideas. I still can hear him sigh: 'I wish we would produce Coca Cola, they never have to come up with a new concept.'
To help with inventions of new items he traveled the world far and wide, at least five times a year, Mother in step, to find and come up with new ideas. Somewhere overseas, Father then would sit in his Hotel room and scribble and draw the results of his brainstorms on rolls and rolls of toilet paper - for lack of actual stationery at the time. Each single message was neatly wrapped together and addressed to the according department back home and every other day an impressive package of abducted toilet paper would arrive at the factory in Germany. Father was omnipresent even when he was not physically at the factory and his employees shook their heads in unison, grinned, laughed, took it seriously and got to work.

The return home of my parents was always highly anticipated and a holiday for us kids Father would not only bring suitcases FULL of samples for the company but also gifts for us from the respective countries they had visited. 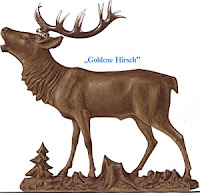 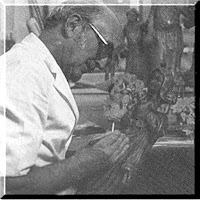 A most important part was  played  by our "Master" Jakob Müller, an Ivory Carver in his own rights in creating new items by first carving them in wood or resin. For several decades Mr. Müller coined most of Koziol's figurines, from angels and flowers to animals and manger figurines, engraving his distinctive style on them.
The biggest success however was the 'Roaring Hart' (stag), gilded by a vacuum coating of 24K Gold. Mighty silly and immensely beloved by customers. "Greetings from the Black Forest."
Above: Jakob Müller at his work bench

Not that we didn't have a beautiful childhood, but I have only a few recollections of my parents being in it. Our resident Nanny was a certified Kindergarten teacher who resided next door to our "Kinderzimmer" (Children's Rooms).  Her name was Marianne and she played a big role in our upbringing - mine and my younger siblings.
Edith, the first-born and Bernhard Jr., the heir to Father's throne, were not in the equation, as I recall. Honestly, I have no idea where they were and what they did as small kids. I surely was too young.
I know however, that later on Bernhard attended a Jesuit Boarding College for 9 years and Edith was accepted into a French Boarding School in Switzerland and later at one in England.
My memories of both start when I was a teenager when they were actually visiting home only during school breaks.
BIG sister Edith was my Idol!

Our "Fräulein Marianne" played with us, taught us and had to go walk with us, every day.
First we went to get our daily 3 liter of milk directly from the farmer in the next little town. The milk was carried in a big tin can and sometimes part of it was being separated and kept out of the refrigerator to create soured milk. And hmm, this was delicious, ceaten with sugar.
After getting the milk though, Marianne would always take us for a visit to her family to have her afternoon coffee and cake. We played and had fun in their huge backyard on dirt soil, in a shed, in the barn, chasing chickens running around. Of course I did not tell Mother that we did not walk, instead went with Marianne to her parent's house.
The barn in the backyard was huge and had a porch roof reaching over the dirt floor where the family dried laundry in air, wind and sun, just like we all did at the time.
One afternoon, bed linens hung to dry and they were big enough for me to hide behind. To hide my feet exposed beneath the hanging linens I reached up and grabbed a wooden overhead plank to pull myself up. Unfortunately by doing so I jammed a rusty nail into my right hand.
Oh no, I did not scream or cry. I took the nail, ripped it out of my hand and threw it away as far as I could, attempting to make it undone, go away!
I knew, nobody would pity me; to the contrary, I would be slapped on the top my head.
So I went back to Marianne's house, said nothing and hid my hand behind my back all the while trembling with fear about what my punishment would be. One glance to my face and Marianne knew that something was wrong. Her mother being a nurse, bandaged my hand. But Marianne now feared she herself would be the object of retaliation when we finally returned home. After all, it would prove that indeed we were at her home, not on a walk through meadows and woods as Mother had instructed.
Uh, this respect that we all had for Mother and Father. It really was more fear, at least on my part.

As luck had it, the flesh around my wound grew into the bandage, which eventually brought on a case of lovely sepsis. I survived, but was no witness to what poor Marianne had to endure on account of this misfortune.

To be continued! (Read from chapter ONE!!)


Please don't forget to hug your kids tonight! Sadly, I totally missed out on that :(
Hugs and/or showing affection was a no-no in our family.

In the meantime, Please, sign up, become a "fan", follow me? Leave a message? Tweet it, click on +1 ...?? I'd be grateful. Thank you!
This is what I am doing now, trying to pay my bills. Maybe you find this very gift you were looking for? :

Kindly
Johanna (YooHUNNa)
.... scroll down, there is MUCH more:
You GOT to start at the Beginning: Chapter 1 !

Koziol invented the Dream Globe, taught dish brushes and shoehorns how to stand on their own two feet, and made the world a more colorful, cheerful place. Since 1927, koziol characters have been colonizing households around the globe. And while their shapes and functions may have adapted with the passing years and trends, the underlying philosophy has never changed:

Make your world a better place and yourself a happier person.