I am remembering now when I was told that my Grandmother had to wear a black wedding dress because ... she was catholic and shame on her ... she was pregnant with her first son: Bernhard. But yes, she was allowed to wear a white veil. Rough custom rules there...
My father always held his mother up sky high and presented her to us kids as THE shining example.
After her husband's tuberculosis related death she cleaned people's houses, washed and ironed stranger's clothes to feed her two children.
Yet when she passed in 1958 we found out that our oh-so-holy upheld Oma was no virgin when she married, although our father made us believe it. 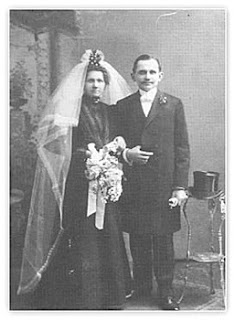 After registering his Ivory Carver's (Elfenbeinwaren) Business in 1927 father quickly had to hire one and then 2 more helpers. Father worked using my grandmother's sewing machine and it's pedal to drive his grinder, sander and Ivory polisher, despite Oma's constant protests. She would lay it into him to save the lights and get sleep. But my father would keep working and to save power he used candle light. 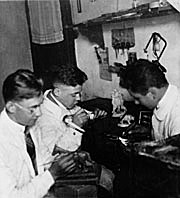 On the right, my Father

No, he never went out 'for a beer' or meet any pals. His mother was very concerned. But three mouths had to be fed.

Soon, my father would expand and even travel across the ocean to promote his goods in America, which was unheard of - a land so far, far away!

Bear with me, it's getting interesting - this shall be continued.

My father had an eye for beauty, balance and relevance. I THINK I got this too.
So, now I am trying to sell what I can not take with me... MY last shirt has no pocket either. I really want to find good homes for my treasures and people that APPRECIATE what they are getting there.

Thank you for logging in.
Johanna (YoooHUNna)

Want to check out already what 'we' are all about...???
Look here: This here would be me / see 'Ancestors' and there 'About me'

Some of the special beauties my father created with his hands can be found here: Just peek, real quick

Besides Ivory I have a vast collection of beautiful and precious cut Crystal items, Bohemian / Czech glasses that you can NOT find in it's originality anymore today.

That's at Bonanza
Posted by Unknown at 2:50 PM 1 comments

I think so!
Thus let me tell you that I DO know a 'little' about it - my father was an Ivory Carver and mighty proud to even have a master's degree. 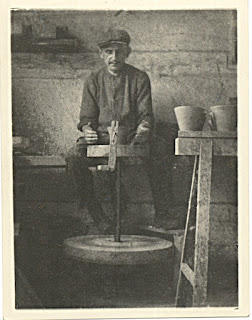 HIS father was a master Potter who worked for Royals in what is Poland today in the late 19th and early 20th Century. So, that would be my Grandfather.
They both had the same name: Bernhard Koziol.

Around 1912 my Grandfather packed up his wife (Johanna) and 2 kids (Lucie and Bernhard) and moved from Poland to West Germany because he heard there was a kiln he could work with. Alas, this kiln was defect and then my Grandfather was drafted to serve in WWI. He came home with severe tuberculosis and was not able to work anymore at all.
A gentle whispering wind grazed his grave soon thereafter.

That's where my father came in. He started carving wood animals and flowers, sold it to tourists and was able to earn the rent for his family at the age of 12 (Twelve!)
Bernhard jr. had no shoes or a bag for books to go to school, yet he went. He was sincere and was teased by his 'buddies' for not coming out and play. He worked and learned.
After finishing his basic school he went to a technical college nearby at the still existing world renown 'Ivory Carving School' in Erbach/Odenwald in Germany.... that's where I grew up.

An Ivory carver first must be talented enough to draw what he has in mind and has to learn to perfect his skill. Ivory is and always was too precious to be wasted. What you start you have to finish.
At the tender age of 19 years my father registered his own business as an Ivory Carver. (Not a MASTER yet) 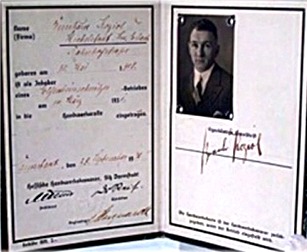 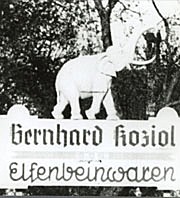 On the left his registration        The first official Company Logo

A little bit about Ivory:
Ivory is a hard, white, opaque substance that is the bulk of the teeth and tusks of some animals such as elephant, hippopotamus, walrus, mammoth, etc
Prior to the introduction of plastics, it was used for billiard balls,
piano keys, buttons and ornamental items
The word "ivory" was traditionally applied to the tusks of elephants
In June of 1997 the ban on ivory trade was lifted under CITES guidelines
and then agreed upon by its member countries
Nothing really comes close or compares to the beauty of ivory
and was admired for centuries by Caesars, czars, kings and queens.

I have been in Africa more than once, I have seen them,
I have HUGE respect for nature and in this case for these
intelligent, amazing creatures. We would not HURT them!

I will continue and show and tell more about Ivory (and cut crystal glass too)
and a little more about my fascinating father and what he accomplished.

Meanwhile you can look some up... my ancestors... right here:
http://www.JFK-Site.com

Interested in my collections for sale?
I always say: Our last shirt has no pockets - so, I am looking for good homes for my rare treasures.

http://www.Bonanza.com/EuropeanGoodies
See you later.... oh and BTW, my name is Johanna (YoooHUNna) ;)